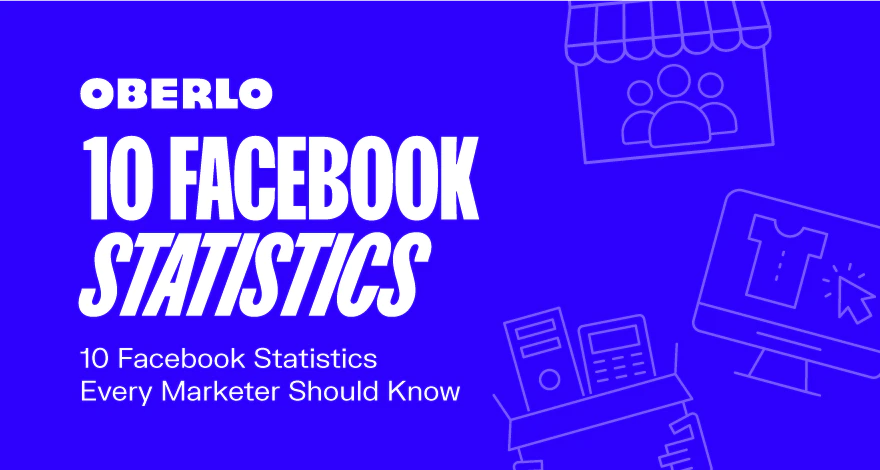 The use of Facebook has become part of our routine. We don’t even notice it anymore. We pick up our phones, or open up our laptops, and go straight to Facebook to see what’s going on. In fact, Facebook has entered our lives so effortlessly, that at this point it’s hard to imagine a life before Facebook. Whether it’s politics or our private lives, Facebook has made information sharing easier than it ever was before. I mean, how else would you connect with your friends? Or share your stories? Or know what events to go to? Or…there is so much more that we depend on Facebook for.

Undeniably, Facebook connects more people than any company ever has in the past. And, businesses know this too. The popularity of social media, and in particular that of Facebook has made brands rethink their marketing strategies and how they deal with customers. And now, millions of businesses around the world rely on Facebook to connect with people. That’s why it’s crucial that businesses, and precisely marketers stay ahead of Facebook trends in order to make the most out of their marketing efforts.

Don’t wait for someone else to do it. Hire yourself and start calling the shots. 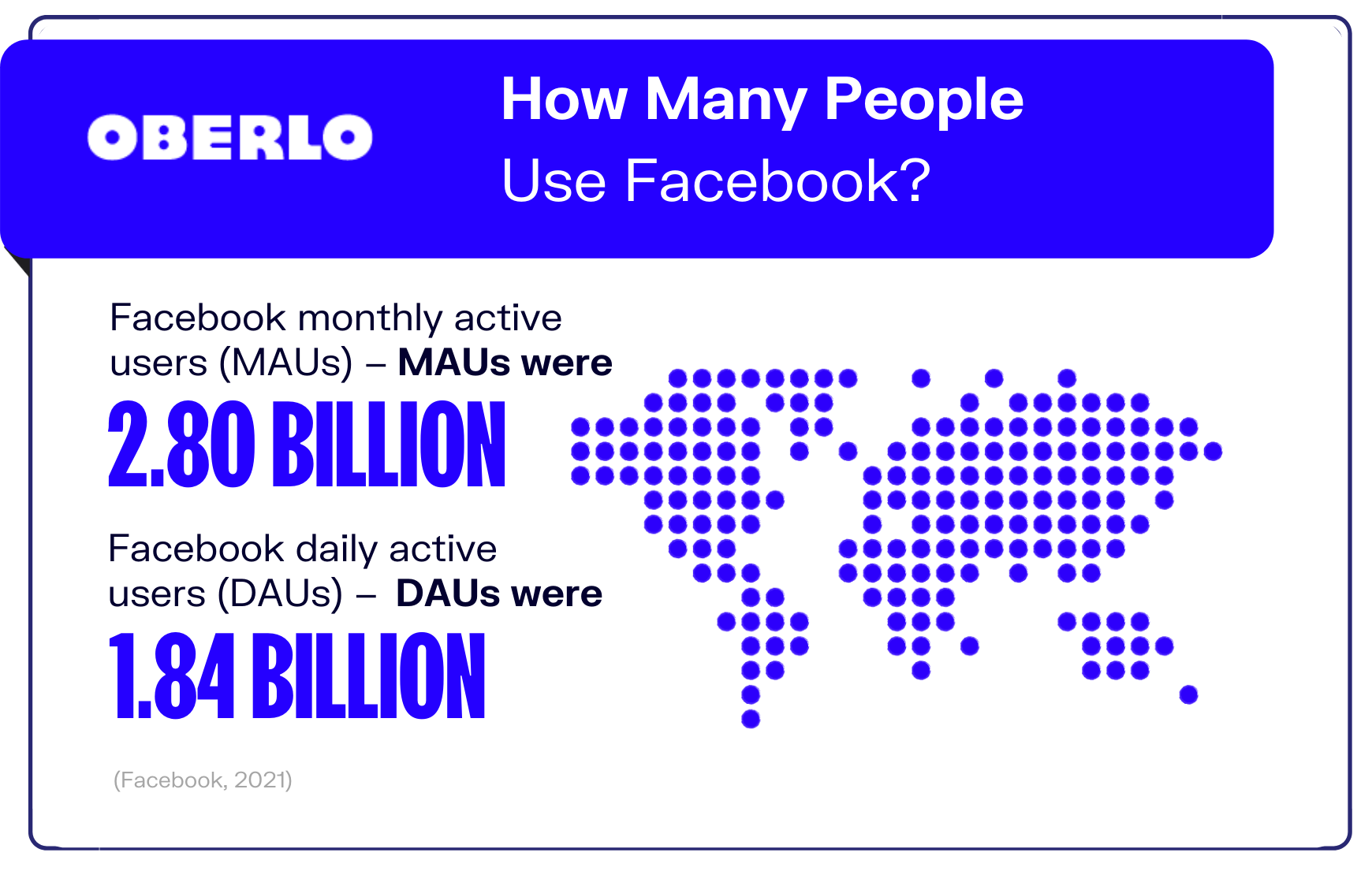 Facebook has 2.80 billion monthly active users (Facebook, 2021). If that number doesn’t blow you away, it also has 1.84 billion users that are visiting the social networking site on a daily basis. This means that users were visiting at least one of Facebook’s core products – which includes Facebook, WhatsApp, Instagram, and Messenger.

Facebook has reached such a massive audience that it’s become impossible for marketers to ignore. And since so many Facebook users visit the site on a daily basis, it makes them a great potential audience for your digital marketing efforts.

Facebook’s mantra has always been about bringing the world closer together, and in the 17 years since its launch, it has not only achieved that, but it has exploded in popularity. 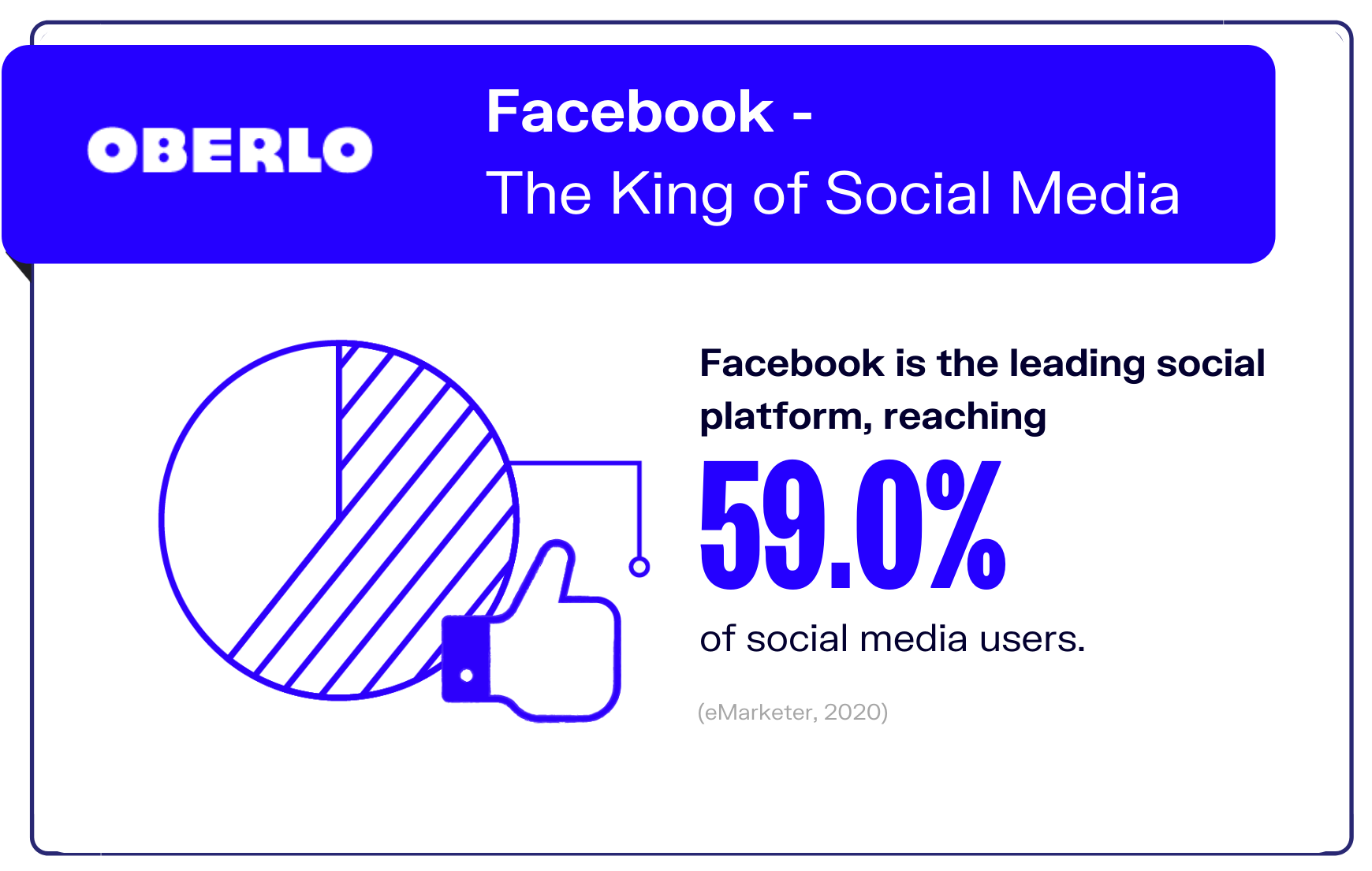 One of the reasons Facebook has been able to maintain its staggering growth is its ability to meet users’ needs. Over the years, Facebook has surpassed all expectations and has evolved to meet the needs of its growing user base.

Its willingness to adapt to the latest trends and changes is also why Facebook continues to reign as the market leader.

Here’s a guide to social media marketing that can teach you how to advertise using social media. 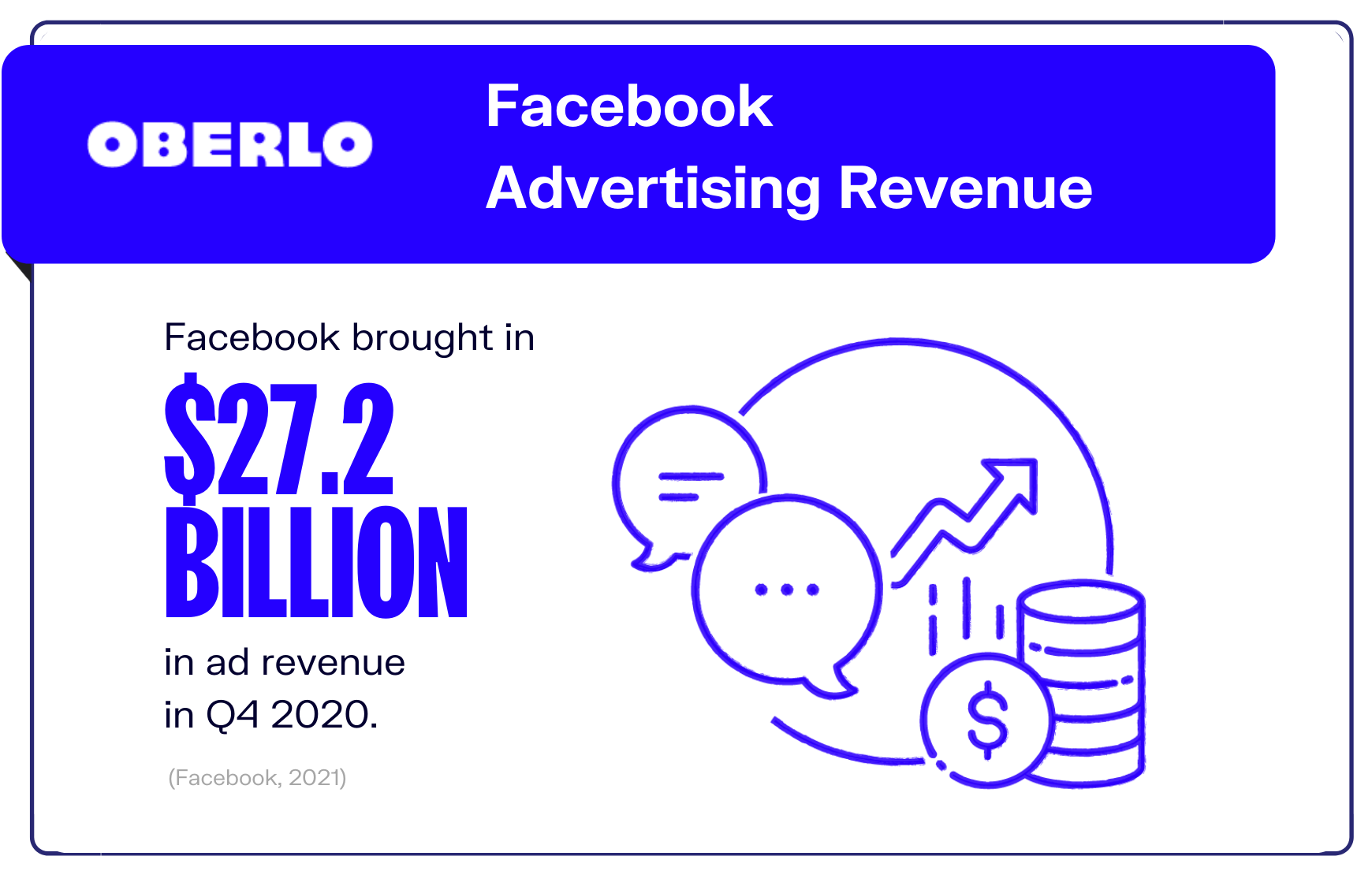 With Facebook’s massive reach and popularity among marketers, it’s no wonder that the bulk of Facebook’s revenue comes from advertisements.

In fact, Facebook earned significantly more in ad revenues in 2020 than it did the previous year. Totaling $84.2 billion for the year, that’s 21 percent more than in 2019. 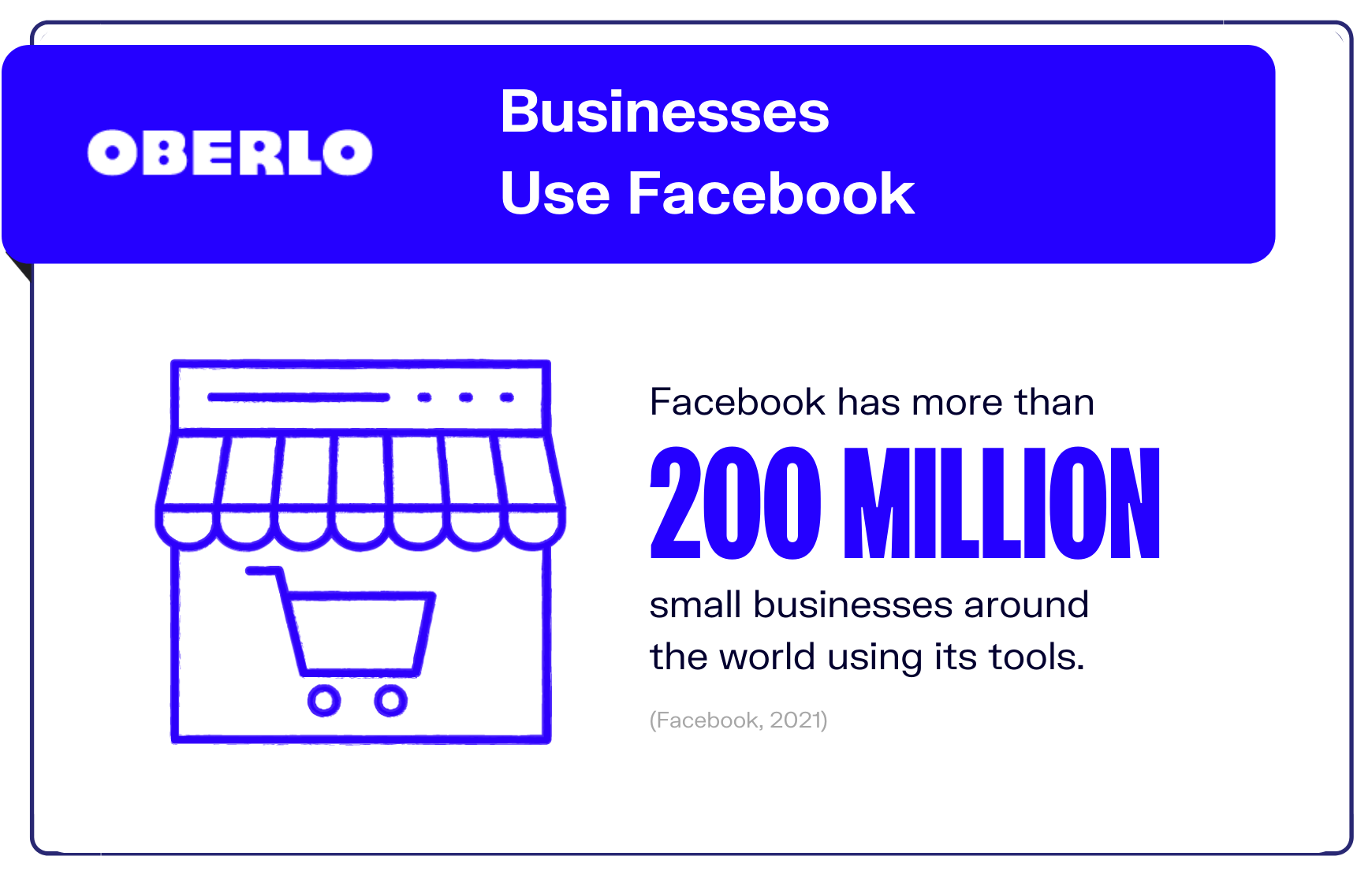 There are more than 200 million small businesses around the world using Facebook’s tools (Facebook, 2021).

One of its most popular tools is the Facebook Page, where businesses can publish and share their business information like address, contact details, and a description of the products or services that they offer. With this, brands can greatly increase their online presence.

There are many benefits to using Facebook Pages. Through them, businesses can reach one of the world’s largest communities. They can also build an audience and connect with people who are interested in what they have to offer.

Customers can post questions to Facebook Pages, to which businesses can respond, which saves time and streamlines communication. In short, a Facebook Business Page is a free opportunity for your business to increase brand awareness and promote positive word-of-mouth.

If you’re looking to get started, here are 19 easy steps to setting up a killer Facebook Business Page.

Out of the U.S. population aged 12 and above, 63 percent claim they use Facebook (Edison Research and Triton Digital, 2020). That’s an estimated 178 million Americans.

Facebook continues to be among the most widely used social media platforms among U.S. consumers. And just to show how dominant Facebook is, the same survey shows that 80 percent of this same group use social media. With this Facebook statistic, it’s safe to say that there are way more Americans who use Facebook than those who don’t.

Age appears to be a differentiating factor for users when it comes to Facebook usage: 74 percent of Facebook users in the U.S. are between 35 and 54 years old. This falls to 64 percent for those between 12 and 34 years old, and just over half of those 55 and older use Facebook.

Knowing the preferred social media platform of the U.S. population can provide valuable information for marketers looking to target this market. 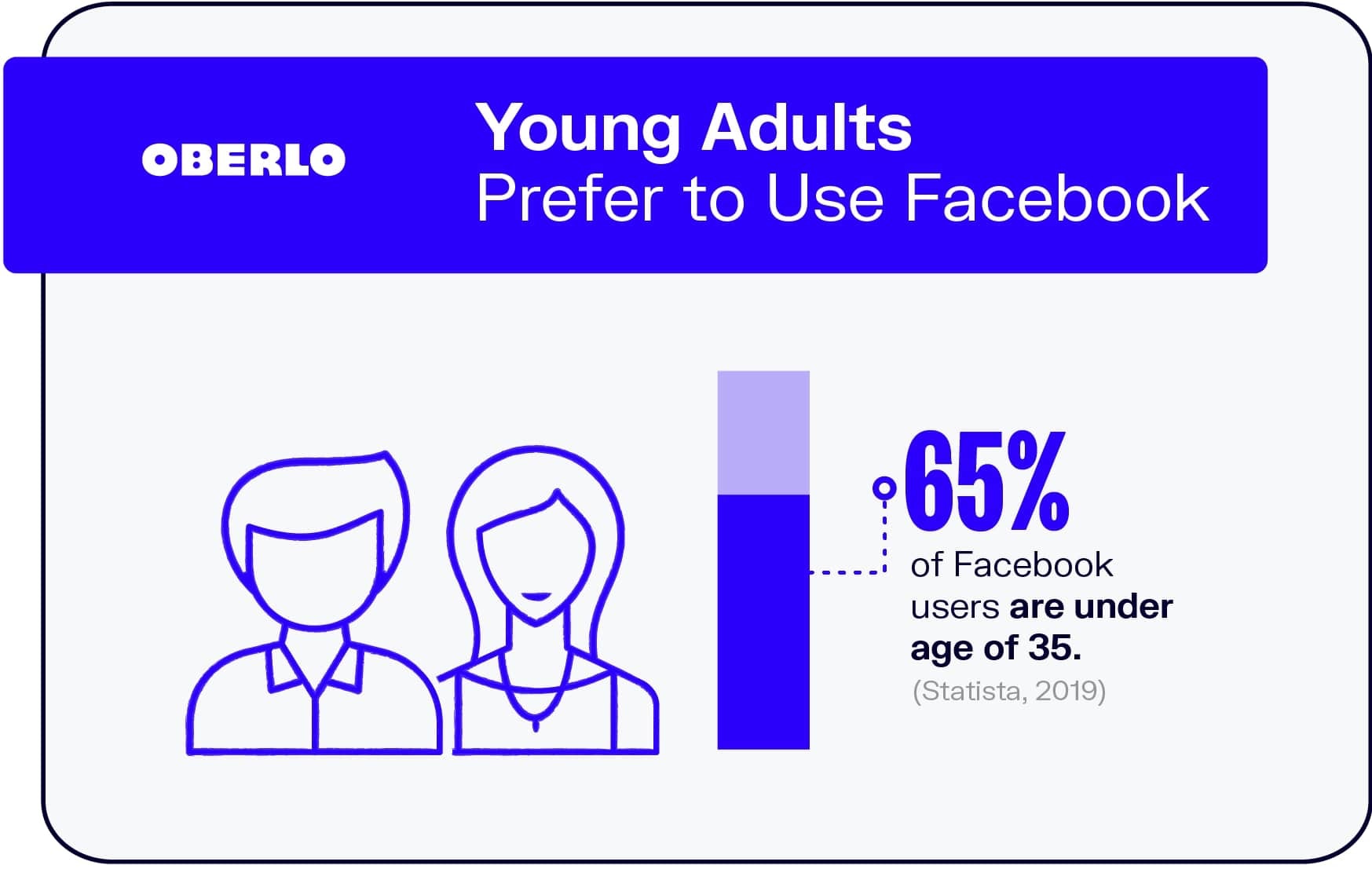 Contrary to popular belief, Facebook still remains the dominant social media platform for young adults. 65 percent of Facebook users are under the age of 35 (Statista, 2019), which means that they fall under the age demographic of Millennials and Generation Z. This Facebook statistic also shows us that for the most part, young adults prefer to use similar social media platforms to interact with others their age.

Despite other social media platforms such as Snapchat gaining popularity among young adults, Facebook still has the attention of Millennials and Gen Z. Understanding Facebook demographics helps to drive your brand’s online presence and guides you on how your business can benefit from marketing through the right channels. Getting to know what platform your target market is using most of the time helps to determine which platform makes the most sense for your business to utilize. This brings you a step closer to improving engagement with your target audience instead of wasting your marketing efforts by promoting on platforms that your target audience isn’t active on.

One of the reasons Facebook has become such a huge social network worldwide is its mobile accessibility. Unrestricted access through multiple mobile apps as well as its mobile website has given Facebook an edge over competitors without a mobile-first approach.

Due to Facebook’s reach on mobile devices, it comes as no surprise that it ranks as one of the most-downloaded apps worldwide. For instance, in the Google Play Store, Facebook Messenger, Messenger Lite, and Facebook frequently rank among the most popular apps.

This Facebook statistic also helps to emphasize how important it is to optimize your content for mobile devices. With user comfort becoming the primary goal, mobile accessibility is something that marketers can’t afford to ignore. 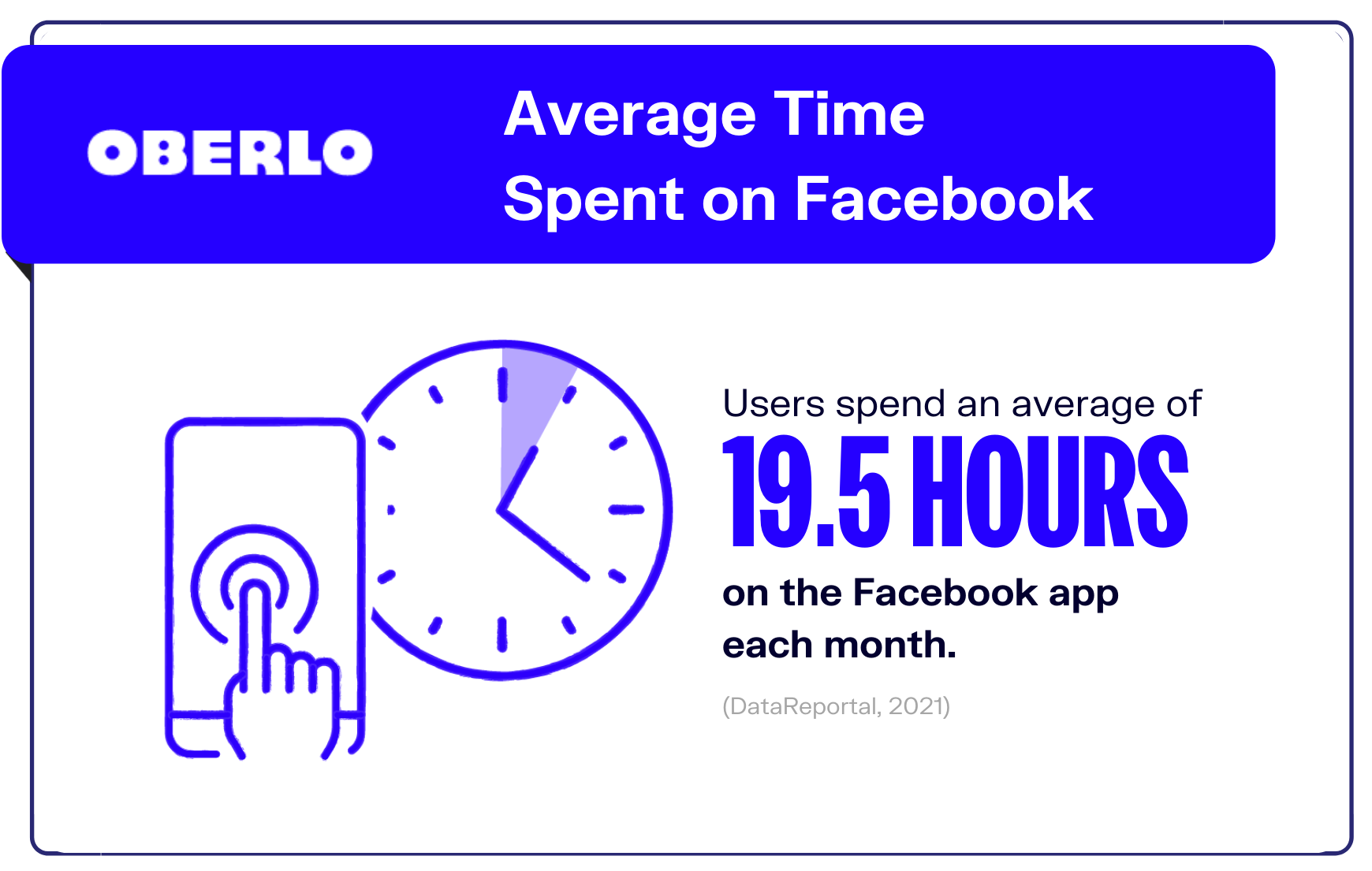 When it comes to time spent on Facebook, the latest Facebook statistics show that users spend an average of 19.5 hours on the social media app each month (DataReportal, 2021).

Compared to other big social apps, people spend almost the same amount of time on WhatsApp, at 19.4 hours per month. This is followed by Instagram, on which users spend 10.3 hours per month. Incidentally, WhatsApp and Instagram are also owned by Facebook.

For marketers, it’s important to understand the time spent on social media apps matters because the more time people spend on these apps, the higher their chances of being exposed to advertisements. This is also why it helps to know Facebook statistics like the best time to post on Facebook.

From a user’s perspective, this Facebook statistic is interesting because Facebook launched a tool in 2018 that lets them track how long they’ve spent on Facebook. It also lets them set a time limit and receive an automated reminder when they exceed their allocated time. 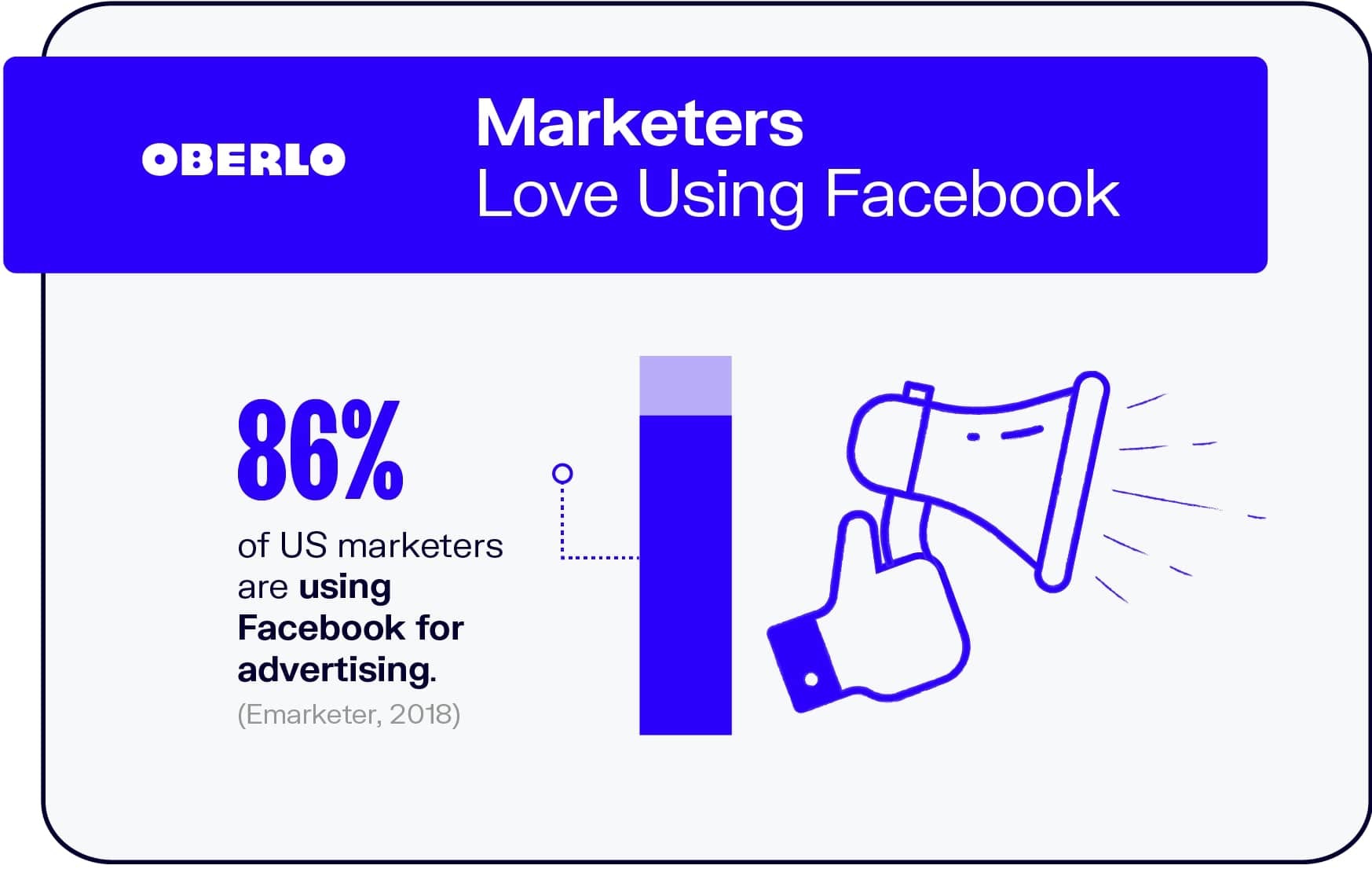 Being the biggest social media site out there, Facebook gets its fair share of attention from marketers as well. For instance in the US 86 percent of marketers are using Facebook for advertising (Emarketer, 2018).

Regardless of the size of your business, Facebook is a great place to start your social media marketing efforts. Almost all types of content works well when it comes to sharing on Facebook, which makes it easy to get started on. Through Facebook not only do marketers reach out to their target audience, but they can also use the social media platform to interact with their customers and enhance their relationship with them. Facebook advertising also helps marketers use the information they have to refine their strategies and target their audience in a more cost and time-efficient manner. Check out this Facebook ads for beginners video to learn more. 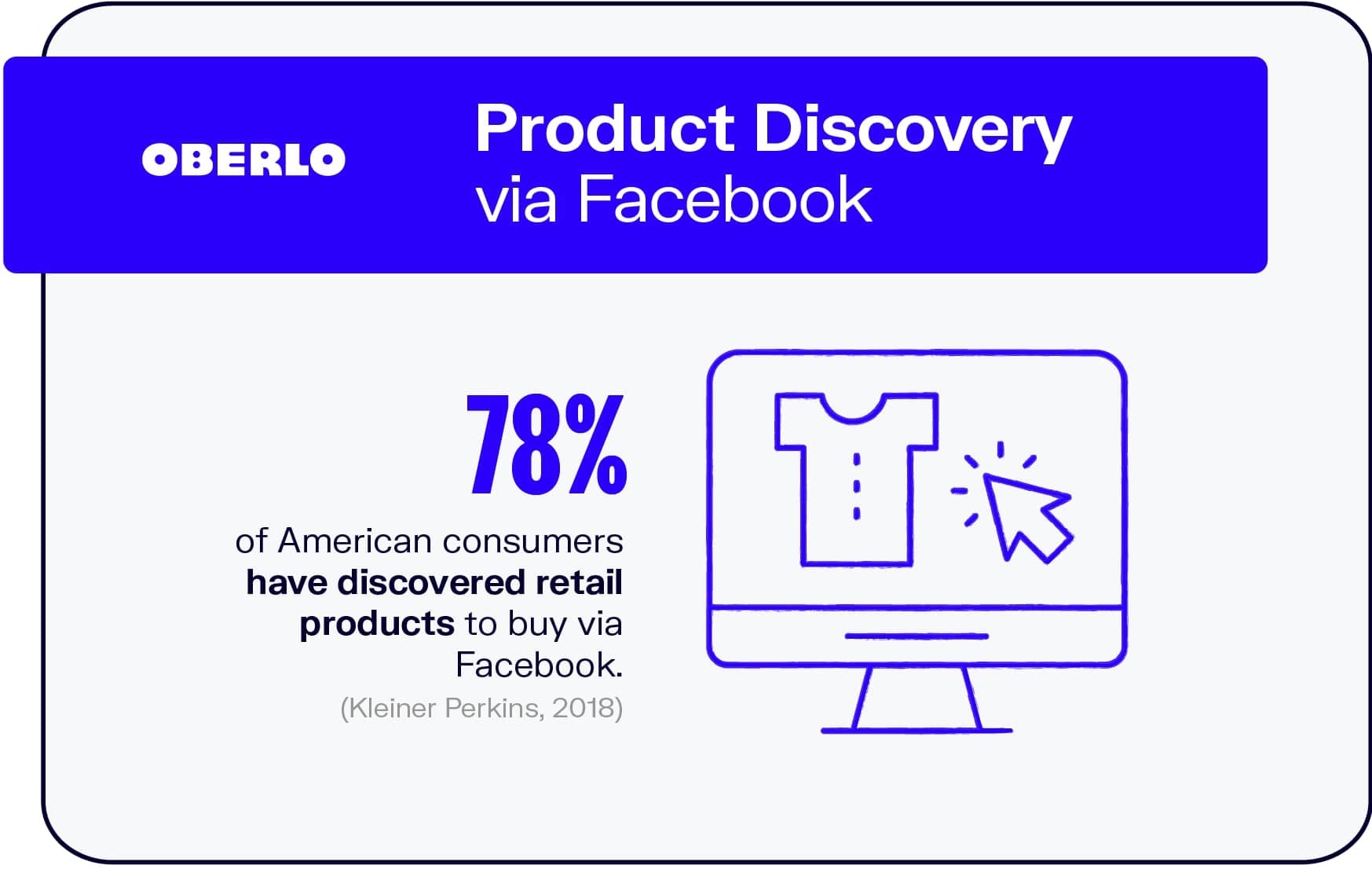 Facebook is connecting people to brands and products. In fact, 78 percent of American consumers have discovered retail products to buy via Facebook (Kleiner Perkins, 2018). The survey suggests that more than half of the people have used Facebook to actively look for products, with the majority of them discovering new products on Facebook’s News Feed, Pages, and Groups.

Facebook is becoming increasingly important as a discovery platform. Users don’t just spend time on the platform to get in touch with others, or to share more about their lives, but also to browse, research, and find inspiration. This information can also be of value to marketers, in order to help them improve the customer journey. Understanding what the customer is looking for can lead to marketers making it easier for people to discover products on mobile and as a result businesses driving more sales.

That’s a wrap for the top 10 Facebook Statistics for 2021. It’s safe to say that in this day and age your audience is using Facebook, and your competitors are too. In order to stay on top of trends, you need to make sure that your Facebook strategy is up-to-date. Especially with the use of Facebook evolving over the years, it’s important for marketers to step up their game in light of these Facebook statistics for 2021. If done right, Facebook can be a game-changer for you and your business.

Here’s a summary of the Facebook statistics you need to know in 2021:

Is there anything else you’d like to know about Facebook statistics and wish was included in this article? Let us know in the comments below!