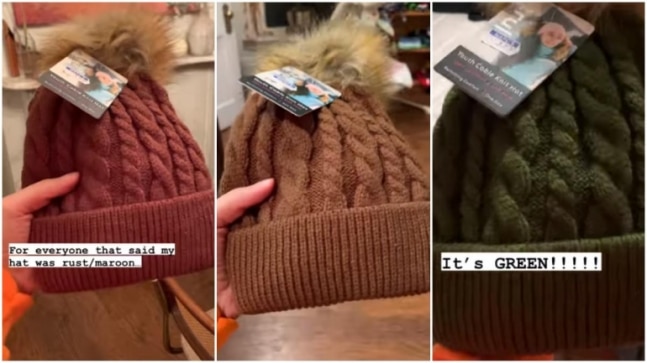 The internet simply enjoys optical illusions and we found a new one on the internet that will leave you rather confused. This particular video was posted by environment designer and Tiktok user Otelia Carmen and has gone viral with millions of views online.

To begin with, Otelia posted a video of her new hat that is certainly a bizarre item as it changes its colour from maroon to brown to green. Yes, that’s correct.

“So, I bought this green hat at the store today and I brought it home and when I took it out, I was like: ‘Why is this brown?’ Then realised: metamerism. This is why lighting is so important in interior design,” Otelia said, speaking of the hat, The Sun reports.

Metamerism is a phenomenon that occurs when two colours seemingly match under one lighting condition, but not when the light changes. As explained in the report published by The Sun, “every light source has its own ‘colour’, so when it’s projected onto a coloured surface, it impacts the colour of that surface.”

As far as Otelia’s hat is concerned, it appeared green in the shop due to the lighting in that area. Then, at her home, the hat looked brown in colour. The hat, in fact, also changed colours from red in the dining room to green in the bedroom at her place.

Otelia also posted the video on Instagram with the caption, “For everyone in my stories who said my hat was rust/maroon. You’re right, and also wrong. This is why lighting is so important in interiors.”

As the video went crazy viral on social media, it reminded social media users of ‘The Dress’ episode all over again. In 2015, a picture of a dress broke the internet as netizens failed to identify its colour. Nevertheless, here are the comments on Otelia’s post.

TikTok Shop UK – build your store and sell within TikTok