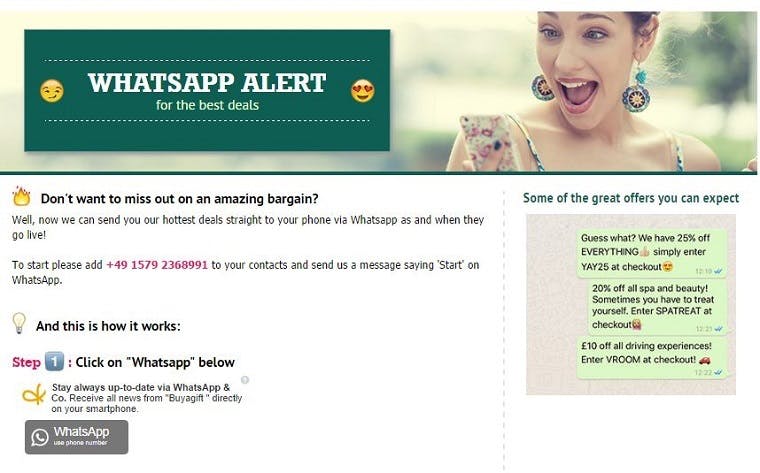 Finding a balance between engaging and intrusive is not always easy, but since the platform updated its privacy policy last August, more businesses have been getting involved.

Here’s a look at a few examples.

Shoe retailer Clarks was one of the first brands to use WhatsApp for marketing purposes.

In 2015, it rolled out an interactive storytelling campaign to promote its popular Desert Boot, using WhatsApp to connect customers with ‘key figures from subcultures of the past 65 years’.

The campaign involved live-chatting with three characters with links to the Desert Boot and its place in history, taking users on a journey back to 1960s Paris, the Mod era, and the Reggae generation of Jamaica. Aiming to change people’s perception of the brand, the decision to use WhatsApp was related to an increased targeting of millennials, with Clarks using the medium of live chat to better engage with a young demographic.

By focusing on the idea that millennials crave rich and engaging ‘experiences’ rather than one-sided marketing, it cleverly brought storytelling into the world of dark social.

Once they signed up for the WhatsCook campaign online, users were asked to take photos of the contents of their refrigerator so that chefs could offer tips and advice on what to make with the ingredients.

While users could also access the service via social media platforms, using WhatsApp enabled a much more direct and personal element, with questions being answered in the moment of need.

With 13,000 signing up for the service and 99.5% of users reporting approval, the campaign proved to be a success in Brazil. As a result, it was then launched in Uruguay, Chile and Argentina.

An early adopter of WhatsApp, Hellman’s proves that mobile messaging can be an ideal platform to solve specific needs of consumers.

It also shows how brands can use WhatsApp as a place for educational content, similar to the vein of cookery videos or beauty tutorials on YouTube.

Designed to increase levels of personalisation, the service involved couples partaking in a three-way conversation with an Agent Provocateur agent, who would then offer lingerie suggestions based on personality and preferences.

As you might expect from the brand, it’s a rather a risqué example, but by asking people to actively seek out the service, it ensured only those who were keen would get involved.

It’s also a good example of how WhatsApp can be used for shopping inspiration as well as direct customer service.

Last year, online gift retailer Buyagift began experimenting with WhatsApp to inform customers about deals and discounts on the site.

By sending alerts direct to WhatsApp, the service was a way of prompting immediate action from customers, building on the idea that receiving a personal message on mobile feels more exclusive than an email.

Despite the sales-driven nature of the service, it’s an interesting case of a brand using the app to promote consumer perks like deals and competitions. The BBC first used WhatsApp during the 2014 Ebola crisis to update people about the virus in West Africa.

Sending a short daily clip to anyone subscribed to the service, ‘Young, Angry and Connected’ is a powerful illustration of how news sites and publishers can instantly reach users.

While it is reliant on getting people to subscribe, the opt-in element is also part of its appeal, with the assurance that users will already be invested and engaged.

Did you miss our #WhatsApp series from #DRCongo?

It’s clear that consumers are now more willing than ever to interact with brands on messaging apps. Since chatbot technology launched on Facebook Messenger, 30,000 bots have been built for the platform, with many brands concentrating efforts in this area.

That doesn’t mean that WhatsApp should be ignored, with the previous examples showing its potential for engaging consumers in a more intimate way.

While WhatsApp remains a bot-free zone for the time being, it’s worth keeping an eye on how brands make use of the service in future.