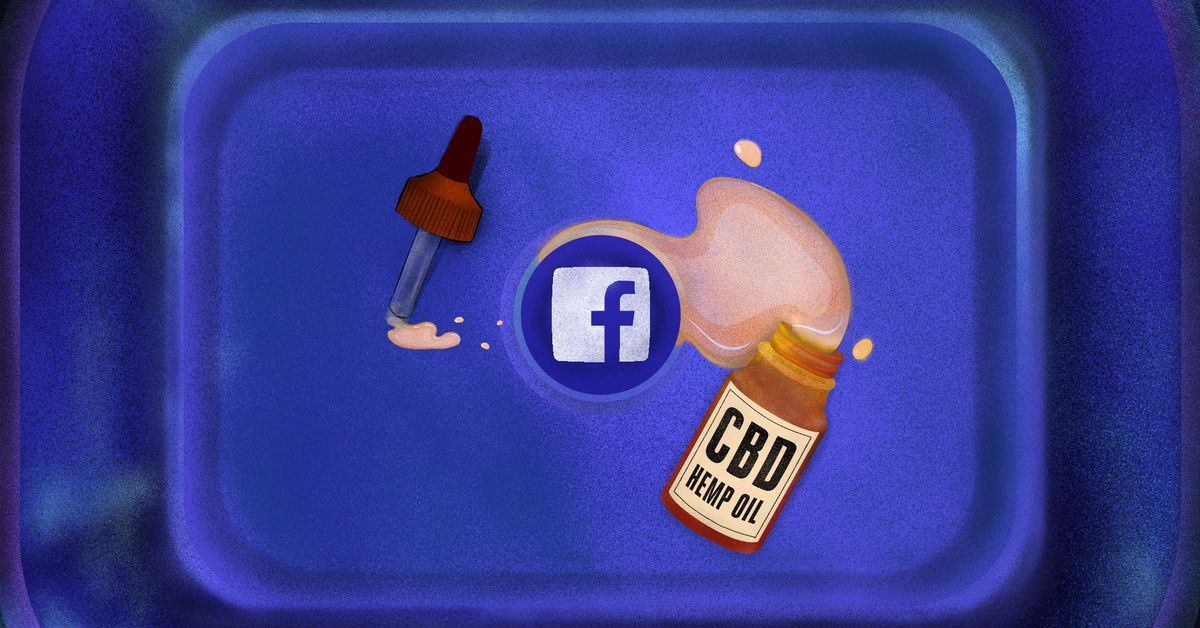 If you’re looking for it, you can find a CBD-infused version of just about everything: coffee, chocolate, vapes, shampoos, masks, moisturizers, mints, pet treats — in short, just about everything. A survey in January found 65 million Americans had tried CBD in some form, with 63 percent finding it effective; it’s finally gone mainstream. As a non-psychoactive derivative of the hemp plant, its effects are difficult to pin down, but the market for CBD is undeniable, estimated to grow as high as $16 billion over the next six years. It’s become something of a cliché that if you have a problem that modern medicine can’t seem to fix, someone will eventually offer you CBD.

Facebook, on the other hand, still treats CBD like the contraband it isn’t. Lacey Steffes owns and runs Spa Serenity, a small business in Baraboo, Wisconsin, which offers a range of CBD-infused treatments. When she tried to post an ad earlier this year featuring — in her recollection — a marijuana leaf and the word “CBD,” her business ad account was immediately disabled. “It was on a Friday because I just remember going home and saying to my husband like, ‘I got kicked off Facebook today,’” she says. “And he was like, ‘I don’t think I’ve ever seen you like this.’” Steffes wasn’t sure what she was going to do next. But she knew she was annoyed.

And it isn’t just Steffes; nearly anyone dealing with CBD ads on Facebook has had some version of that experience. Monika Allen is a freelance copywriter who handles social media for one client in health and wellness. Her client had planned to host an open house with presentations from members of the local community, and one proposed submission happened to cover CBD oil and how it might be helpful. They put an ad up. “Within about five minutes of putting that ad up, her ad account got shut down,” says Allen. Her appeals were rejected. So Allen decided to take one of Facebook’s ad creation classes to show she was serious about following the platform’s rules — and then found there was nothing in them about CBD oil. “They do say marijuana you can’t promote,” she said. “And alcohol for different ages and things like that. But CBD oil is not THC.”

Facebook’s advertising policies make no mention of CBD, but a spokesperson for the company confirmed to The Verge that users are not allowed to post ads mentioning CBD or ingestible hemp, and that paying to promote posts that mention those products is also not allowed. The only sign of that in the company policies is a prohibition against “illegal products or services,” “drugs & drug-related products,” and “unsafe supplements,” the last of which is “as determined by Facebook in its sole discretion.” For Facebook, that “sole discretion” means that CBD is treated the same as any other marijuana derivative, a bizarre policy for those familiar with the extract. And with no public mention of the issue, there’s no way for users to know they’re risking an account ban just by advertising a spa treatment.

The de facto ban appears to have been in place for years, according to Jen Rudis, the founder of the Wisconsin wellness outfit Jenerate Wellness. Back in 2017, Rudis’ clients had been coming in to inquire about stress, anxiety, and pain management — the kind of thing CBD is colloquially known for treating. So Jenerate Wellness began carrying CBD, which Rudis herself was very familiar with because she’s been working in the “alternative healing and medicine” space for more than a decade. “I wasn’t 100 percent aware, I guess, on where Facebook stood on it,” Rudis says. Rudis shared a picture of the CBD product on her shelf — and here she’s careful to note that she wasn’t claiming anything about its efficacy — and posted it. It was a Friday. That night, she got a call from her marketing team. “I tried to log into Facebook, and my entire account was deleted. Like I didn’t just lose ads. They deleted my entire business account — like hit the delete button,” Rudis says. “No warning, no email. No, ‘you’ve screwed up,’ no 30-day slap on the hand, literally hit the delete button, and my entire business account was gone.”

Facebook is currently facing a lawsuit over those enforcement actions, one that alleges common law fraud and deceptive ad practices. The suit was brought by Felicia Palmer, founder of one of the oldest hip-hop websites on the internet. (She came to cannabis after a brush with breast cancer in 2016.) Facebook accepted money from Palmer to extend the reach of her posts about CBD while she was promoting Cannaramic, an online summit Palmer put on at the end of last month. At first, Facebook simply didn’t show the ads to the users Palmer wanted to reach. Then the company disabled her ads account entirely. According to Facebook the ad was blocked because “we don’t allow ads that promote illegal, prescription, or recreational drugs.” Palmer is being represented pro bono by David Holland, the executive director of NORML — the National Organization for the Reform of Marijuana Laws — and the suit is open to other plaintiffs to join. (At press time, Facebook had not responded to requests for comment.)

While Facebook is treating CBD as a drug, the reality is much less clear. Short for cannabidiol, CBD doesn’t get you high, because it doesn’t contain the psychoactive molecule THC. In the US, cannabis is still considered a Schedule I substance under the Controlled Substances Act — but CBD exists in a legal gray area. Last year’s Farm Bill lifted a federal ban on hemp production, which in turn legalized CBD oils as long as those oils contained no more THC than hemp, the non-psychoactive varietal of Cannabis sativa. But how is Facebook supposed to know how much THC is in any given vial of CBD mentioned in an ad?

It doesn’t get you high

When CBD falls under the FDA’s scrutiny, things get even more complicated. The compound is considered a prescription drug when it’s added to food products, according to federal law, because it is the key ingredient in the only cannabis drug that the agency has approved — Epidiolex, an anti-seizure medication. That regulatory quirk that would seem to rule out a ton of CBD-infused food, but the FDA generally does not take action against people who produce CBD-infused supplements unless they make wild claims about their products’ effect on human health. (Think: people who claim that CBD can cure Alzheimer’s disease.) So to summarize: CBD is legal, sometimes — when it’s produced from hemp and doesn’t appear in a product that makes wild health claims. And that, remember, is only for the US. It’s hard enough for sellers to keep track of, let alone a global, multibillion-user platform where people can upload whatever they want.

But Facebook’s problem isn’t just that their interpretation of CBD’s legality lacks nuance. It’s largely a secret, and leaves few meaningful options for appeal. A Facebook spokesperson confirmed as much over email, noting that CBD falls under three separate site policies: its Community Standards, its Pages-Specific Policies, and its Advertising Policies. The rules for CBD differ only slightly for each. Facebook’s regulated goods policy (falling under Community Standards) explains that the site doesn’t allow people or businesses to purchase, sell, or trade non-medical drugs, prescription drugs, and marijuana. While CBD isn’t mentioned specifically in that policy, a Facebook spokesperson said that hemp and CBD posts don’t violate the site’s Community Standards if they’re posted without paid distribution. Palmer’s suit stated that she’d paid to distribute a post, which is when her account was disabled.

Under Facebook’s Pages policy, pages aren’t allowed to promote the sale of prescription pharmaceuticals and that they must approve pages for online pharmacies in advance. Pages for hemp and CBD that aren’t run by online pharmacies and don’t promote prescription drug sales are kosher, the spokesperson confirmed. That said: Facebook’s Advertising policies prohibit the promotion of illegal, prescription, or recreational drugs — and that includes CBD and hemp products. The problem is that these regulations don’t appear anywhere on the pages linked.

For now, The company seems to be blocking any promoted mention of CBD, which goes way beyond what’s required by federal law. Facebook also doesn’t say anything specific about CBD in their advertising guidelines, which is what most advertisers check before paying for an ad. It’s impossible to write a policy where every conceivable infraction is spelled out (there are millions of businesses on the platform, and many more ad buys), but for anyone dealing in this particular gray area, it’s the most important single question about the guidelines. Getting it wrong has immense consequences, and the existing documents don’t give much of a hint.

Even though the legal issues around CBD are complex, it’s been difficult for users to reason with Facebook in order to recover their accounts. Allen, Steffes, and Rudis all appealed the actions taken against them. Allen told me she went back and forth with Facebook a few times before the company gave her a final warning and declined to unsuspend her account. Steffes said the experience made her rethink her entire business strategy. “When accounts run ads that don’t follow our Advertising Policies, they’re disabled,” a person named Clyde wrote to her. “There’s no further action that you may take here. We don’t support ads for your business model. Please consider this decision final.”

“I mean, it’s like the government,” Steffes said. “There’s no recourse.” In her first message to Facebook, she noted that she’d spent $42,000 on Facebook in the last two years. “It has no value to them. I understand they’re a multibillion-dollar company. But for me, for a small, single-storefront business, that’s a huge amount of money.” Steffes says she feels good about her new marketing plan, which involves fewer Facebook ads.

“How do I advertise CBD now? I don’t”

Rudis hired a Facebook consultant to help her appeal, which cost her several thousand dollars and many hours of her time. It didn’t help. “I had to start over,” she said. “Six or seven, maybe eight months later, we finally stopped trying, and just had to start a new Facebook page altogether.” Facebook was the biggest driver of Rudis’ business; it took her business a full year to regain a similar number of Facebook followers. “As a small business owner, I don’t have deep pockets, I don’t have big box marketing funds,” she said. The deletion “tremendously impacted our revenue and our entire business, actually, for an entire year.”

“How do I advertise CBD now? I don’t,” says Rudis. “The only thing you see on CBD oil in my store or in my business now is I will take a picture, and I will post it on my story. I don’t use the word CBD. I don’t market it. I don’t advertise it. I do nothing with it.” That’s worked for her so far.

For her part, Allen feels disconcerted by Facebook’s immediate, harsh response. “They don’t even tell you what policy you’re violating,” she says. “It just doesn’t feel very fair.” That open house, though, went off without a hitch. Allen’s client was pleased with the number of new people who came. Some, apparently, had even heard about the event through Facebook.